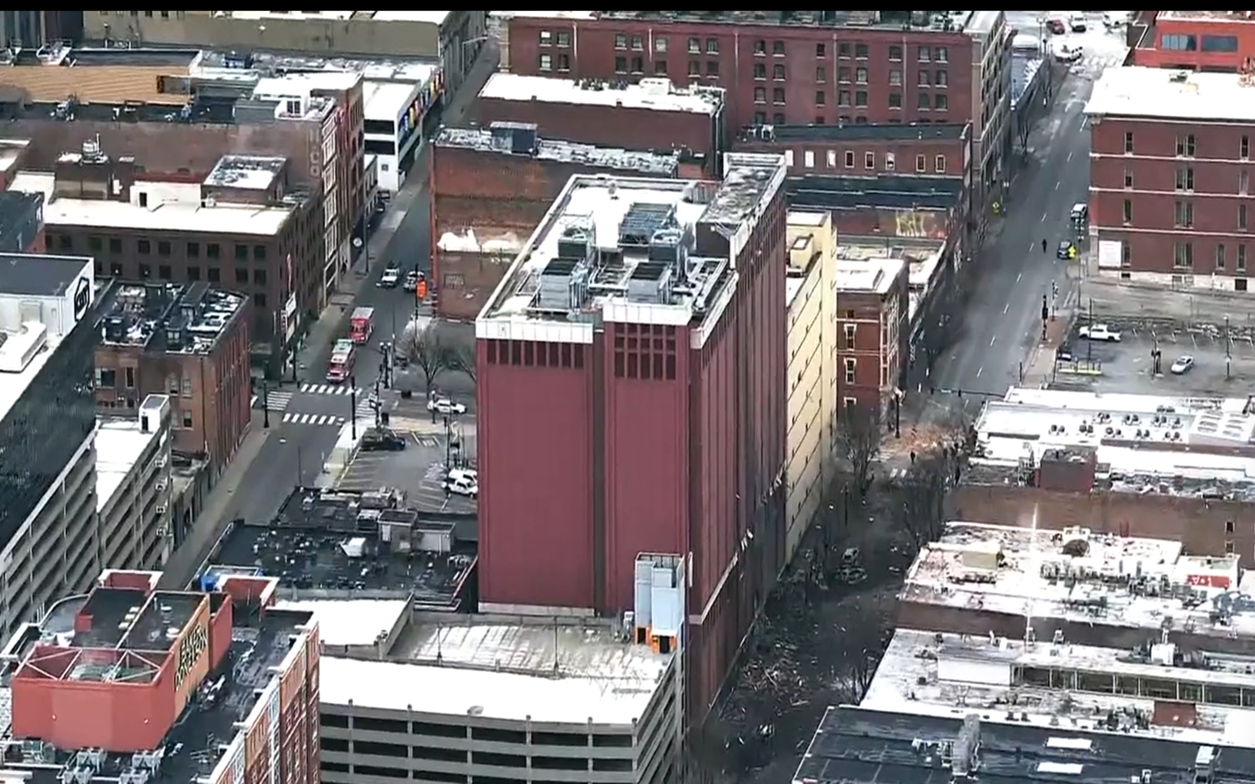 Today in my hometown of Nashville, a bomb was released at 166 2nd Ave & Commerce Street. Apparantly the bomb was in an RV. It began at 6:30 a.m. by the police being notified of shots in the area. When the police arrived, a warning coming from the RV saying "this area must be evacuated now!" This was prior to the explosion. See video here (be careful it's alarming)...

The alledged footage of the #Nashville explosion was also uploaded to this YouTube account:https://t.co/9hwOAkDaGv

The police verified there was a warning released prior to explosion so this video must be legit.

The police are still investigating the cameras in the area and other footage. The Department of Justice and FBI is involved in the case. They do state it is "deliberate". According to a local reputable paper:

The sound of the explosion Friday morning could be heard miles away, as people reported windows shaking from South and East Nashville.

Gov. Bill Lee in a statement said the state will provide needed resources to determine what happened and who was responsible.

Mayor John Cooper said he toured the damage, describing broken glass and water mains with insulation "blown up" into the trees. He estimated about 20 buildings had been impacted.

Those are the facts that we know. Here are other facts we must consider when looking at the big picture as Christians:

Peter Navarro releases 36-page report alleging election fraud 'more than sufficient' to swing victory to Trump https://t.co/D8KrMHnFdK. A great report by Peter. Statistically impossible to have lost the 2020 Election. Big protest in D.C. on January 6th. Be there, will be wild!

On January 6, 2021 they will be hosting the demonstrations across this country in one last scream before Trump leaves office. We all saw the report that Mar-a-largo does not want him back. We also saw the report that Ivanka and Jared are moving to an island near that resort. I was on a call with the White House the other day and they talked like they knew there will be a transition. This whole time I suspected he may do a court turnover of the elections and stay, however now I believe my first intuition was right - Trump will not go down on a sinking ship and we are sinking. He is surely passing a lot of legislation to setup the church for 2021 that is not good. One of them is the LGBTQ funding they are offering the churches and organizations to push this agenda. President Trump has been the greatest advocate for the LGBTI movement.

In February, Trump promoted Richard Grenell, then the U.S. ambassador to Germany, toacting director of the Office of National Intelligence. It made Grenell the first openly gay person named to a Cabinet-level position.

Three months later, Grenell was appointed the Trump campaign's senior adviser on LGBTQ outreach. On social media, he praised his boss as "the most pro-gay president in American history."

Trump has corrupted the Republican Party more than any other President in history. He brought the vomit from the Democratic party and infected the Republicans and the church. Look at what his fruit has been all across this country since his 2020 campaign:

Setup of the PROUD BOYS:

Proud Boys in kilts. Dozens of them gathering downtown now for today’s March for Trump. pic.twitter.com/BTJWmGC6Yp

Preceding the Trump Pride events was an event last week in Nashville, where an estimated 75 gay conservatives gathered at the first Outspoken Pride event, which is a project of National Log Cabin Republicans.

Charles Moran, wearing his separate hat as managing director of Log Cabin Republicans, said it was intended “to create a space to convene some of our major influencers and movement leaders in the center-right LGBTQ community.”

“While Log Cabin Republicans is generally well-known in the establishment GOP/traditional campaign circles, our GetOutspoken campaign, as well as the broader Trump movement, has activated countless supporters well outside of the normal political channels, so we wanted to create an event that would help bring these new influencers into the fold, since they connect with so many supporters and voters,” Moran said. “I think our weekend was a success in that respect.”

Among the attendees, Moran said, are gay conservatives notable on social media, including Grenell, “Walk Away” movement founder Brandon Straka, Rob Smith, and anti-Antifa journalist Andy Ngo, as well as voices highlighted in the Outspoken project, such as Hazem Farraj, Christian Walker and David Leatherwood.

President Trump addressed the Nashville crowd by phone, as did the Vice President Mike Pence, who’s notorious for his anti-LGBTQ record, and second lady Karen Pence, according to Grenell.

Moran affirmed Trump and the Pence family addressed Outspoken and gave a limited readout of those calls.

“We did speak to the President, the Vice-President/Mrs. Pence,” Moran said. “They acknowledged our support, expressed their appreciation for what we’re doing to engage the broader LGBTQ community, and highlighted and recommitted to the administration’s HIV/AIDS and [decriminalization] initiatives.”

President Trump just called them in Nashville as they did an "Outspoken" meeting to continue spewing their vomit across this country. Not only was it Trump, but it was Pence too. There is too much coincidence of what's been happening in Nashville to not be noticed.

I believe it is to gear up for the great persecution coming to us next year. Happening on our holiday, in the main city of the Bible Belt is not a coincidence. We will see...

I do know President Trump is throwing more money at the LGBTI agenda next year to "freely express themselves" which is going to cut the head off the church. Get ready Bride.  I've been warning Christians for a while now that Trump is preparing for the persecution of the church. All the Tweets where he puts people down and destroys lives with his mouth; he knew exactly what he was doing because he was mentored bby Roy Cohn who taught him how to destroy with his mouth. So, when he stood in front of the church with that Bible, I knew it was a signal to begin. Following that event, that church area became headquarters for Black Lives Matter and the street changed to that as well. The downfall began.